While visiting California Carnivores in 1999, Peter D’Amato gave me a small offshoot labeled Dionaea ‘Red Dragon’. Although I had been growing flytraps since 1955, this was my first Dionaea cultivar. Over the subsequent six years, the plant divided numerous times and now I have many individual plants of that clone (see photos below).

Since that initial introduction to Dionaea cultivars, I have developed a hobby of comparing cultivars under similar growing conditions, including Dionaea ‘Akai Ryu.’ It soon became apparent that the small offshoot plant that I received from Peter was not the true Dionaea ‘Akai Ryu’. Whereas Dionaea ‘Akai Ryu’ is described in Carnivorous Plant Newsletter 25(2):50 as “far superior to any of the parents in terms of growth rate and vigor,” and that “growth habit and flower morphology are typical for this species, Dionaea ‘Petite Dragon’ remains the smallest plant (even as a 6-year-old flowering adult) of any flytrap that I have grown in 50 years. Grown outside in full sun, a mature Dionaea ‘Petite Dragon’ trap is typically 15 mm long, with the largest attaining 17 mm. The rosette diameter of mature plants is about 6 cm and rarely exceeds 10 cm in spring. The flower scape is about 12 cm tall and always bifurcates into two flower clusters, a large and small one. This is the only clone of the numerous “named” clones that I grow in which the flower scape bifurcates regularly. I have selfed this plant over several years and all of the offspring grow into small adults having bifurcated flower scapes. This plant and its seed offspring are all red like Dionaea ‘Akai Ryu’, and the stigma is red as in many other all-red Dionaea clones.

This plant will principally be of interest to those that study the genetic diversity of Dionaea muscipula. Those that seek giant specimens will perhaps conclude that Dionaea ‘Petite Dragon’ to quote a well-known critic, “only merits the trash can because it is a crappy grower.” However, some growers may be interested in miniature rather than giant flytraps.

Etymology: This clone is herein described as Dionaea muscipula ‘Petite Dragon’, because it suggests a small Dionaea ‘Akai Ryu.’

Although the plant produces fertile seed when selfed and all of the seedlings are red like the parent and the offspring retain this double scape, the preferred method of propagating it is by vegetative means to preserve the genetic integrity. See: http://rziemer.cpphotofinder.com/rziemer/zphotos/VFTPetiteDragonSelf.html

These ‘Petite Dragon’ Venus Fly Traps above (left) are grown outdoors in my bog (see below) and the ones on the right are during winter dormancy in my unheated greenhouse. The left photo was taken on 14 September 03 and the right one on 31 January 04. 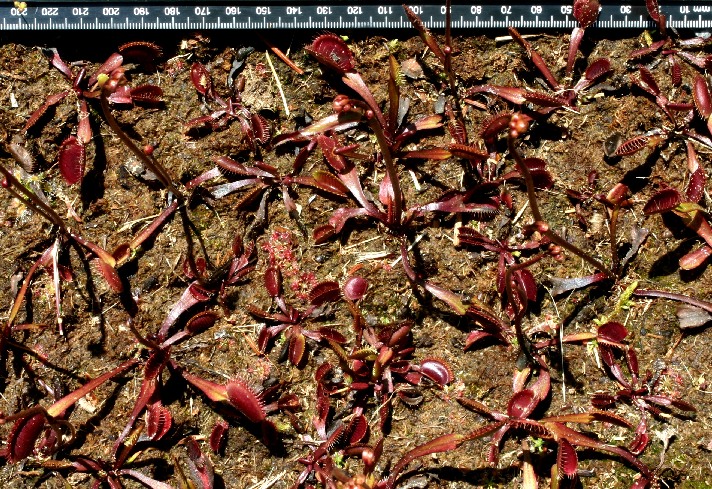 The photo above of ‘Petite Dragon’ Venus Fly Traps in my outdoors bog was taken on 3 July 06. 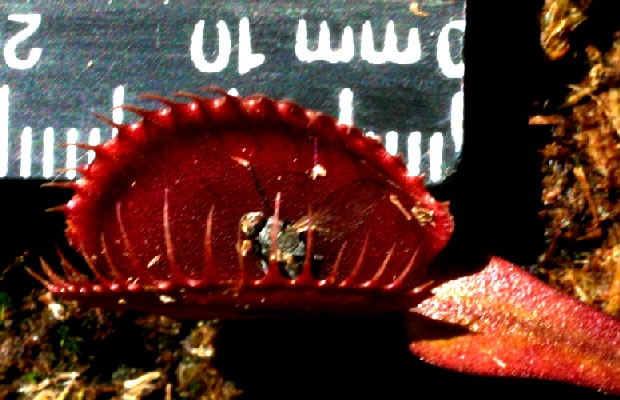 ‘Petite Dragon’ traps are typically 15 mm long, with the largest attaining 17 mm. The photo was taken on 3 July 06.

The ‘Petite Dragon’ plants are located in the extreme upper left corner of the right photo.

The ICPS database has this to say about ‘Akai Ryu’: "Growth habit and flower morphology are typical for this species. The leaf petiole, blade and trap exhibit dark maroon to burgundy coloration. Any green coloration has only been noted around the center of the plant in mid-winter. The entire trap, interior and exterior, exhibits dark burgundy coloration throughout the year. Grown under laboratory conditions, where nutrient levels can be comparatively high, the plants still exhibit partial burgundy coloration in the traps and leaf blade." 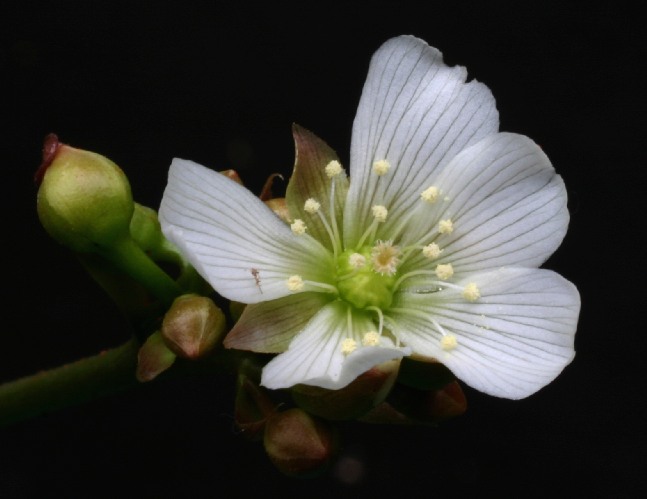