I have been collecting and growing carnivorous plants for many years. In 1980, Ellen Land-Weber included the following photo on page 103 (with permission) in her book, The Passionate Collector, Simon & Schuster, 1980. 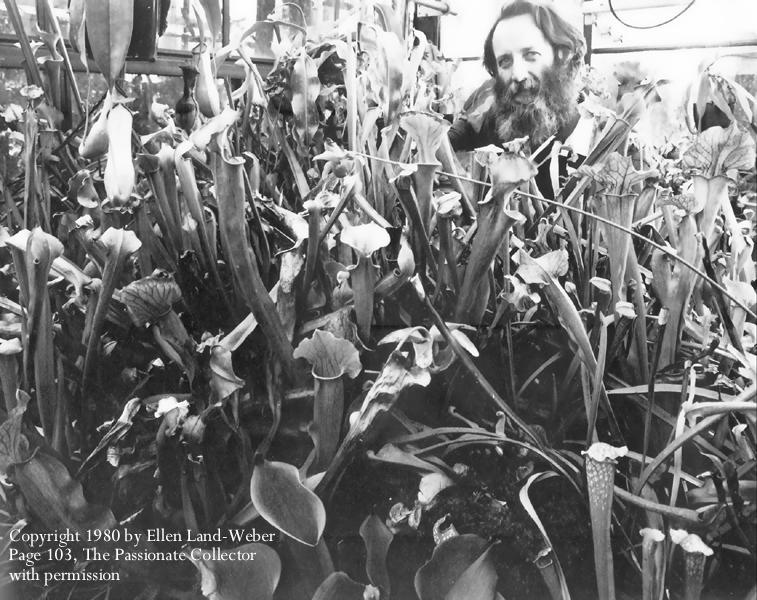 The accompanying text from page 102 of the book (with permission) reads:

"About twenty years ago I saw a package of Venus-flytrap "bulbs" in a store and bought them for $1. I still have the same plants today, although they have divided many times. Several years later I saw the carnivorous-plant collection at the University of California Botanical Gardens and begged a very small offshoot of a Sarracenia hybrid, which I also still have today. My collection remained stable at two species until the Carnivorous Plant Newsletter group became established about six years ago. This opened up a means of communication with other growers. I then developed an international seed and plant exchange in which several hundred growers exchanged information and plants. My collection quickly expanded to a couple of hundred species, which includes some of the rarest carnivorous plants in the world."

"Collecting rare and endangered plants can be beneficial if it is conducted with care and knowledge. Carnivorous plants are generally found in wet, boggy places, viewed as undesirable for urban or agricultural use and therefore being drained and filled increasingly often. There are now several species of carnivorous plants which no longer exist in the wild, but only in a few cultivated collections."

"Three principal genera are shown in the photo. In the foreground is a portion of a Heliamphora, a plant native only to the high mountain plateaus of Venezuela. The majority of the plants shown are of the genus Sarracenia. These pitcher plants are generally found only in the southeastern United States; however, one species, Sarracenia purpuria, ranges into northeastern Canada. The hanging plants are of the genus Nepenthes, found throughout southeast Asia and the western Pacific. The large carnivore in the background is not one of the plants, but the collector."