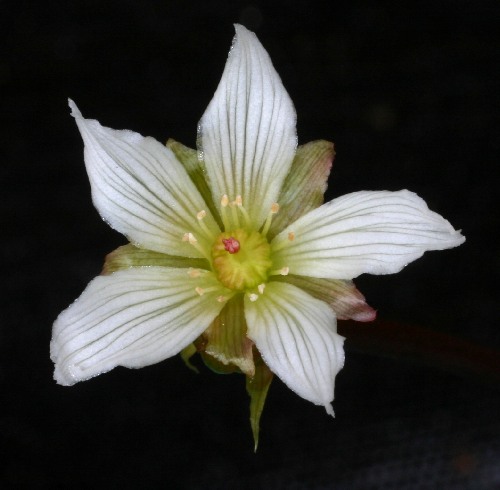 This VFT 'Clayton's Red Sunset' was received from Dean Cook on 13 December 04. The photo above was taken on 21 May 06.

The ICPS Database states: "This plant is an all red flytrap which I have named [Dionaea 'Clayton's Red Sunset' {C.Clayton}]. It regularly grows up to 25 cm (10 inches) across, although extremely slowly, and is one of the wonders of the flytrap world. The features which make this cultivar different from other red flytraps (such as [Dionaea 'Red Dragon' {R.Gagliardo}] or [Dionaea 'Red Piranha' {E.Read}] are the following: A)The petioles are almost always long and thin. The other red flytraps have quite wide petioles, especially during the winter. B)During the winter, this cultivar totally loses its leaves, at least when grown in a Mediterranean climate. The other red flytraps retain at least some of their leaves. C)This plant is totally red, except for the teeth on immature traps, which are yellow. [Dionaea 'Red Dragon' {R.Gagliardo}] incorporates green as part of its coloration at some time during its growth cycle. D)The color of this cultivar is a deeper, darker red than the other currently named red flytrap cultivars. It becomes almost black in the summer if exposed to full sunlight. E)The marginal spines on this cultivar are normal, and not sawtooth as in [Dionaea 'Red Piranha' {E.Read}]."