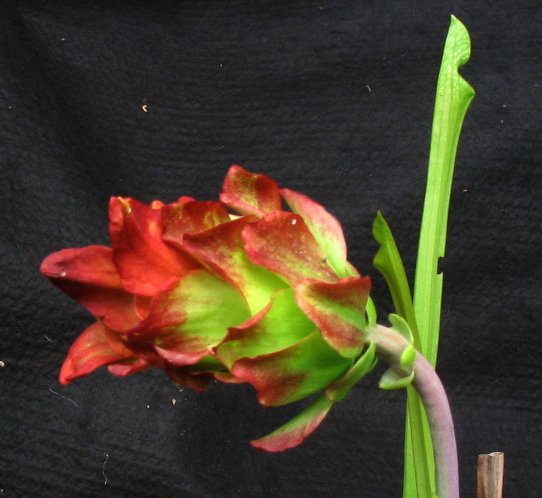 The ICPS database has this to say about Sarracenia 'Tarnok': "Pitcher colour, size and shape are typical for this species. the flower exhibits a proliferation of tepals (undifferentiated petals and sepals) arranged in whorls. The outermost whorls of tepals display less mutation than the innermost whorls. The innermost whorls, which are normally represented by the style umbrella and stamens, are highly mutated, often fused with separate ovaries and have deeply incised v-shaped stigmatic clefts. The stigmatic lobe is often missing or is found attached to reduced or modified tepals which resemble filamentous stalks. The tepals are green in colour at the base, gradually changing to a deep red/maroon and are persistent throughout the growing season."

"Etymology: in honour of Mr. Coleman Tarnok who discovered this cultivar"