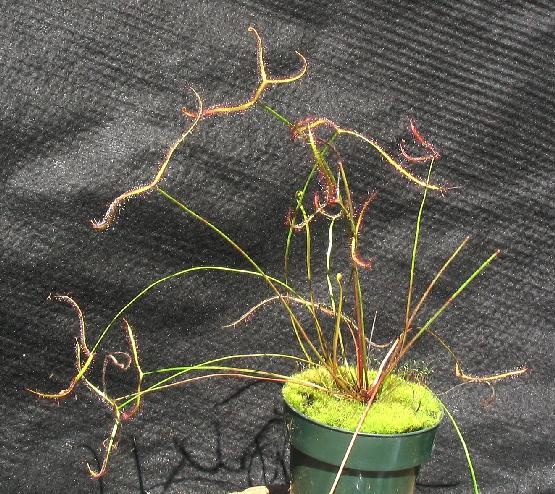 The plant above is the 'Marston Dragon' cultivar of Drosera binata received on 31 March 03. The photo was taken on 14 September 03.

The ICPS database states: "Hybrid seedlings between the varieties (of [Drosera binata {Labill.}]) are seldom satisfactory, and I was fortunate in selecting one solitary seedling in 1983 which has proved itself to be of exceptional quality, and which I have named [Drosera 'Marston Dragon' {Hort.Slack}]. Its pendulous stems are up to 36 cm (14 1/4 inches) long and bearblades the segments of which are as wide as those of [Drosera binata {Labill.} var.dichotoma {(Banks & Soland. ex Sm.) Mazrimas}], and are the largest I have seen in this section. They divide irregularly into two to eight points and are the same yellowish green as in [Drosera dichotoma {Banks & Soland. ex Sm.}] (sic!), but the reddish pink tentacles render them more attractive. A curious characteristic of the blade is the manner in which the segments spread sideways, often to a great length, the points curving round and clutching the air like talons, the whole reminding one very much of the feet of a chinese dragon. The flowers are large and are borne on long straight scapes, but again hardly seem to suit the weeping habit, especially if the plant is in a hanging basket, and I always remove them. In every respect I advise the same treatment as for [Drosera binata {Labill.} var.multifida {Mazrimas} f.extrema {Hort. ex Gilbert}] (nom.nud.)."